Signed up for the GW2 beta! Fingers crossed! 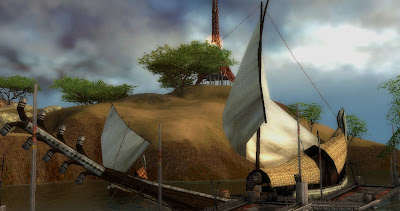 Its been awhile, I know.  We have been on the move.  Since arriving in Kourna we have rescued Koss, which was laughably easy.  I thought it was a trap, but it seems they've underestimated us.  They will not do so again.  We've also run on some light sunspear rescue missions, but now that we have them all we have to evacuate them.  This will prove a problem, because our path the boats is heavily guarded. 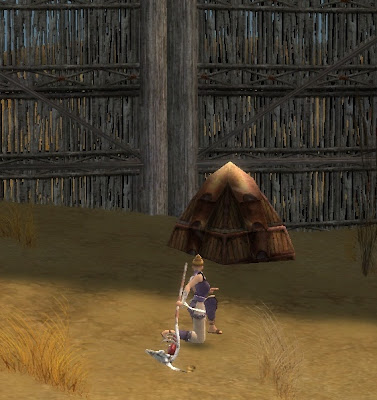 Our task at hand is to neutralize every one of the twelve guard posts on the way to Koss' contact.  Seems simple enough in such a large area but  it is teeming with enemies, and directly in the center is a huge fortress that will seige us  if we are spotted.  We must do it quickly.    There are also traps.  Sentry trap that fling sharp projectiles on a timed sequence.  Luckily Rojis teaches me how to disarm them, crafty sunspear. 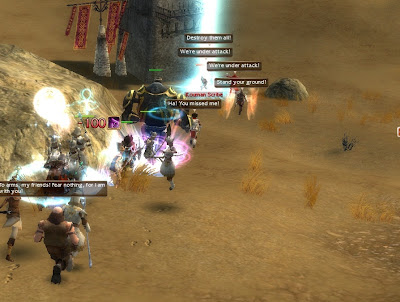 We leave from the command post with our sunspears.  We wipe out the first command post as quickly as we can, and move on to the next, and the next.  We flank patrol groups of corsairs and kournans and send them to the mists.  We edge the perimiters, we are definitely no match for what the fortress would have in store for us.  Finally we wipe out the last of the towers, and move towards Koss' contact. 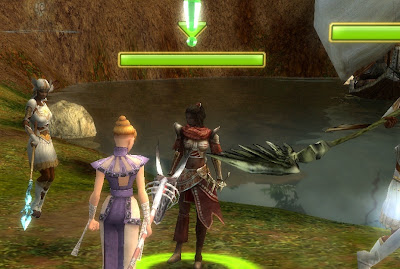 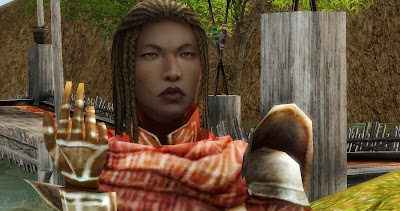 We get to the boats and there stands a woman, Corsair to the bone.  I do not trust her, but Koss says she is not a loyal corsair.  She goes where the money is, and at the moment, the money is with us.  They know eachother well I can tell, so I let go of my better judgement and we board the ship to Kamadan to give our findings to the Council.  They will not be happy, we are at open war with Varesh 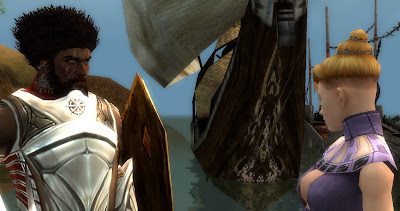 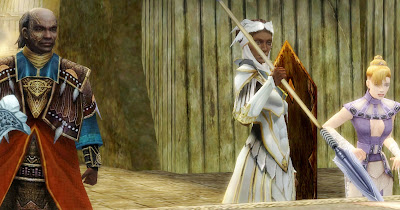 Oh Elona, where have you been all my life.  It is warm, sunny, and smells of the sea.   Kormir greets me right off the boat, pleased to see us so soon.  From one adventure to the next, i'm developing a taste for saving the world.  She asks me to help her rally her troops, and so I stand with her as she delivers a fantastical speech that lights the hearts of the Sunspears on fire.  The problems in Elona stem from a woman named Varesh.  She is a dervish sorceress, and according to Kormir, she is intent on bringing Nightfall upon the lands of the Golden Sun.  She wants to free Abaddon from his immortal chains, blah blah blah, sounds so familiar.  Someones always trying to free something or other to end the world.  Third times the charm right? I hope theres no battles afterwards. 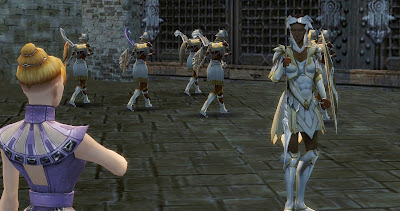 We arrive at the consulate docks with our troops are Kormir.  They look a little apprehensive at first to be following someone new in to battle, but my record speaks for itself, and most importantly, Kormir Speaks for me.   Kormir is a seasoned warrior with a spear, older with experience, and reveared by all generals of the peacekeeping Sunspears, and feared by the wretched Kournans.   We fight our ways through the gates until we reach Nerashi's team.  All of this seems too easy to me, and Dunkoro, a weathered healer, balding and sunburnt, agrees with me.  Kormir agrees aswell, but she demands we push forward anyways, and watch for being flanked. 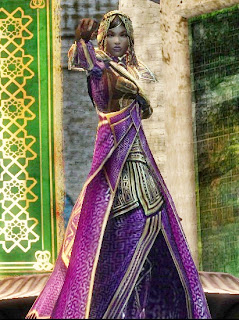 We find Varesh in the keep by a shrine.  She is casting a spell, and a large ominous purple orb hovers over the circle, pulsing.  She cackles with laughter as an enormous beast emerges with a few emmisaries.  Nightmares to behold. 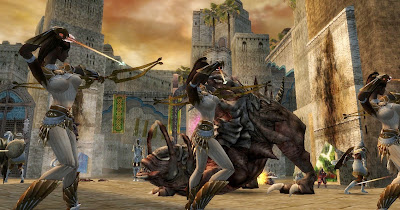 We fight valiantly, but our new recruits are not trained against beasts.  One by one they fall until we have no choice but to retreat.  It does not come easily to any of us, but it is now our responsibility to get as many as we can out safely. 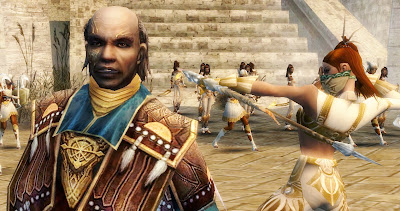 Dunkoro beings to organize our retreat, finding a safeway out under covering fire.  Kormir is the only one that remains in the keep alive, and Varesh just continues to laugh while intermittantly yelling "ABADDON!" 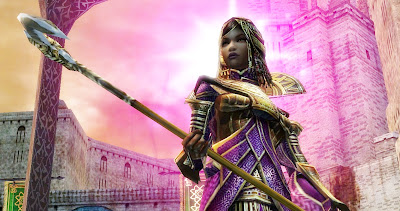 Poor brave Kormir.  As we stand at the gate she is the only sunspear left in the battle, and she is lone against the great Hunger.  It will eat her eyes, it keeps barking, and she falls captive.  We must run. Upon arrival on the mainlands, we are told that Koss has been taken aswell.  He is being held near though, looks like two rescue missions are on the docket now.
Posted by EvieDessa at 5:45 AM No comments: 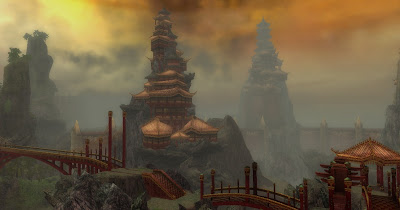 We arrive in the garden.  The sky is hiding behind clouds of orange and yellow and gray.  Shiro stands with Togo atop the steps, and we are come from kuunavang with our gifts of skill.  He sees us and smiles. 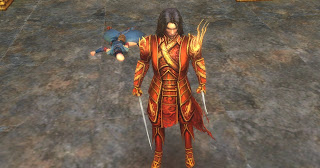 Slashing Togo's throat faster than we can make it through the gates, Shiro slowly changes from transparent to solid.  He is mortal now, he is human.  This means we can kill him, but at the loss of Togo.  A selfless sacrifice to be sure.  We battle him, he recouperates quickly and banishes some team members to the mist only to be replaced by a Shiro'ken.  Quickly we realize that destruction of the shiro'ken will restore them to us.  The battle continues for what seems like hours, back and forth the advantages are gained and lost until Shiro is weakened.  He had forgotten his mortal bound body will not accept the physical strains he attempts to it, and we outnumber him.  With a final blow, he is defeated, and his corpse falls to the floor.  The mist he will return, to stay hopefully this time. 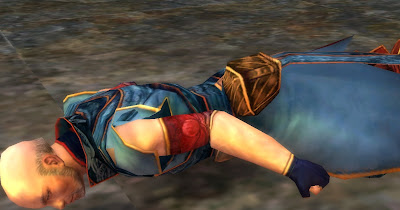 We meet Suun in the temple.  Everyone is having trouble deciding how to feel.  Excited about our great victory, but grieved at the death of our Master Togo, we collect our weaponry gifts and go.  Cantha was a beautiful world, but it is not a place I would like to stay.  I need some sunshine, and perhaps another adventure.  I heard news of stirrings in Elona, perhaps I will charter a boat there. To Elona!
Posted by EvieDessa at 7:32 AM No comments: 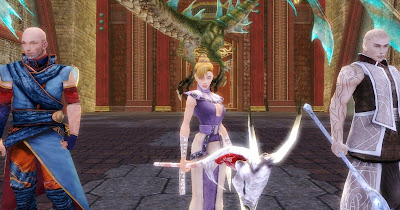 A group of four.  We are the end of Shiro. We arrive at the palace to find it seemingly abandoned.  The gates are all locked upon the way but we see Shiro'ken.  These Shiro'ken appear to be at ease, they must have been here for awhile.

This only means that Shiro is already within the palace.  He wants the emperors head so that he may be mortal again.  Though this seems a good thing for him, it is good for as aswell, because mortal we can kill.  Kuunavang gives us great gifts of skill we will need to be victorious, and we go on our way.

Read more »
Posted by EvieDessa at 7:24 AM No comments:

In to the jade whirlpool.  Mhenlo led us to the harvest temple, theres been an awful occurance.  The emperor has taken Shiro on as a body guard.  Can you believe that?? Shiro! A bodyguard. 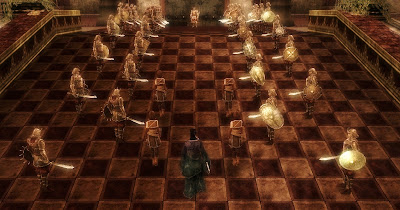 He was allowed entrance to the harvest temple, but the guards say he was acting most strange. Stranger than allowing a murdering ghost to be on your team? I would think not. 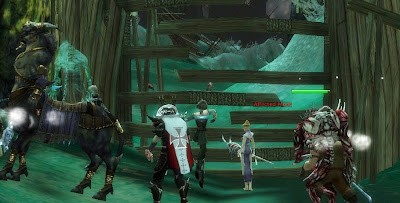 We begin our descent through the jade maze of the harvest temple.  An old friend joins me, his skills have become quite honed over the years and the help is always a welcome sight. 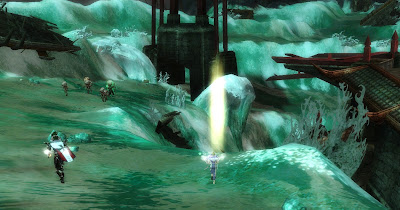 We are attacked by afflicted creatures the entire way down as we run in circles trying to attack or appease the great dragon, Kuunavang.  Finally he takes us in to the central chamber of the temple where he speaks. 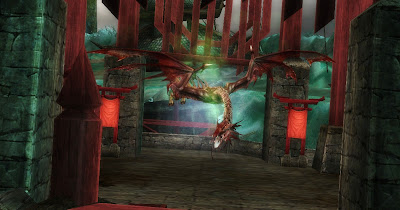 We cannot hope to defeat Shiro if we cannot deem ourselves worthy to Kuunavang and recieve gifts. He attacks us with poison flames and weakens us with his scales but we hold strong and are victorious.  He tells us there is massive unreset within the palace, the emperor himself is under attack and we must hurry.  Shiro attacks for the final time.

Posted by EvieDessa at 7:18 AM No comments: 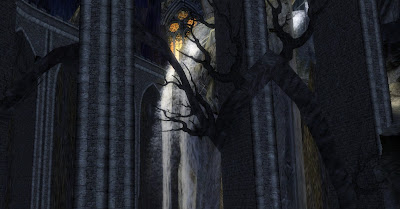 We arrived in the eternal grove but our negotiations were not met well.   The Kurzicks were amidst a war with the luxon over the Eternal Trees, and they all believed the afflicted to be gone when we battled Shiro in the sewers. 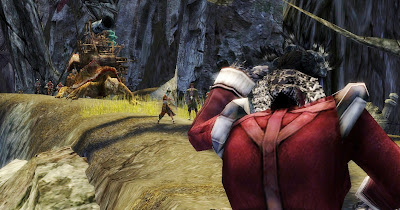 They lock us up in the keep when the Luxons approach in attack, turtles the size of houses with large cannons attached to their back slowly waddle forward.  A sight of terror, if not so awkwardly humorous!

Read more »
Posted by EvieDessa at 7:08 AM No comments: 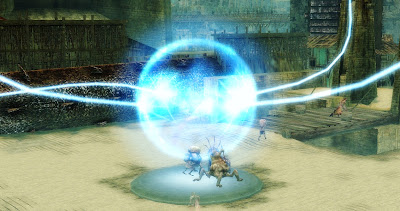 We are in Sunjiang.  Shiro has chosen this to be his  entrance to the mortal world.  Portals of icy blue set orbs along the causeways and lines of mystical blue connect them all.  Within the center orb lies Shiro, and he is meditating. 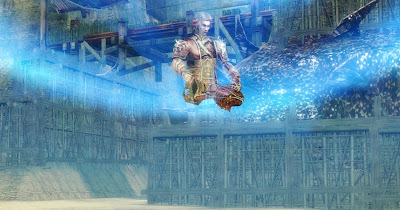 Concentrating all his power on these orbs he sets afflicted puppets all over blocking us .  Master Togo notices at every portal lies a spirit guardian, and if we send it back to the mists the portal will most likely close.  It is worth a shot.

Read more »
Posted by EvieDessa at 5:42 AM No comments: